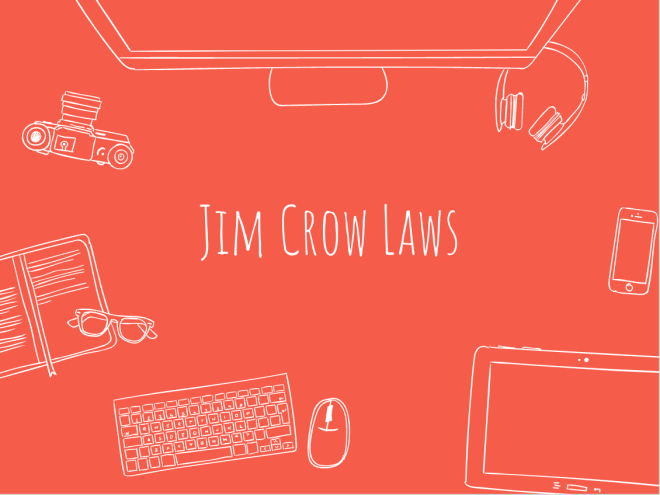 Hey guys, as I said be notified for more posts to come this week, here’s one more. Enjoy. This post is about Jim Crow laws in the U.S

Jim Crow law:  In U.S. history, any of the laws that enforced racial segregation in the South between the end of Reconstruction in 1877 and the beginning of the civil rights movement in the 1950s. From the late 1870s, Southern state legislatures, no longer controlled by carpetbaggers and freedmen, passed laws requiring the separation of whites from “persons of colour” in public transportation and schools. Generally, anyone of ascertainable or strongly suspected black ancestry in any degree was for that purpose a “person of colour”;
Jim Crow Law: Jim Crow refers to a series of racist laws and measures that discriminated against African-Americans. Even though these laws were enacted between 1876 and 1965, the effects of Jim Crow are relevant today. Jim Crow was the name of the racial caste system which operated primarily, but not exclusively in southern and border states, between 1877 and the mid-1960s. Based on ideas of black inferiority, to stop blacks to become equal to white men.

Segregation: Separation because of race, gender or religion

Integration: acceptance as equals into a society of persons of different groups (as races)

Due to the social intolerability of racial equality, people of various races were not allowed to share waiting rooms. By being supported even at the local police department, it shows just how much racial tensions had affected the governing systems of the United States. Though people of a different race were allowed to ride the same bus, all coloured riders were forced by law to sit in the back in marked coloured sections or had to sacrifice their seats to white passengers if the white part became full. Often, they were not even permitted to enter the bus through the same door to further symbolises racial dominance of one over the other.

The black and whites were allowed into theatres if they behaved well and the owners were allowed to have separate compartments for white and black people.

Located in: Ferris State University
Address: 1010 Campus Dr, Big Rapids, MI 49307, USA
This museum is about showing people the artefacts were black were tolerated and telling people that they need to learn about tolerance and social justice. The pieces in the Museum were put there to teach the people that these were all caricatures, that they were lies and deception and not real. The main reason for the museum was to use the objects of Intolerance to Teach Tolerance and promote Social Justice. In the museum we see objects or figures of stereotypical black people, which show white people that they are superior to Black people, We see signs which separate White and coloured people. We see tickets which refer to coloured and white people being separated which further adds on to the Idea that Black people were inferior to White people. The objects also tell us that being Racist was a norm, that it was Cultural to consider Black people inferior to white people. I think it is essential to have such a museum because it teaches the new generation and people like us, that there was a time when this happened and that we should try and correct those mistakes, make amends with each other, to accept each other as one. The museum has many artefacts which refer to Black people being portrayed as stupid and uneducated, which developed the fact that calling black people. Idiots or stupid was normal. The museum teaches us that we should learn from the past and try and make the present and future better.